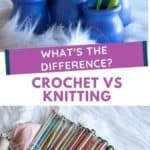 “What are you knitting?” You’d be surprised how often I get this question when I’m out and about and crocheting.

I usually just share what I’m making and maybe explain that it’s crochet. Both crafts do share a lot of similarities.

They are not the same though. Do you think you’d like to try out crochet? 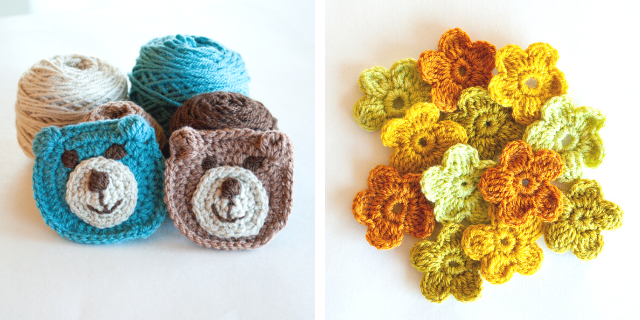 Here are some of the main similarities and differences between crochet vs knitting, including why crochet is easier.

This can be a hot topic. Many folks prefer one craft to the other.

I learned to crochet long before I learned to knit, and I think this is one of the reasons why I gravitate towards crochet. For me, it goes faster, is more intuitive, and designing in crochet comes naturally.

Others love to knit, and for them, it goes more naturally. Both yarn crafts can produce truly beautiful, hand-crafted creations to be enjoyed and shared.

While some of it comes down to personal preference, this guide will show you some of the reasons why you may prefer crochet if you are looking for a new hobby.

One of the biggest differences between crochet and knitting is in how the fabric is constructed.  In crochet, you are working with a single hook and the yarn. Knitting, on the other hand, uses two knitting needles and the yarn.

Using hooks versus needles generally ends up creating different stitches and fabrics. Because crochet uses a single hook, stitches are generally made one at a time.

Thus, crochet can be better for certain types of projects where a thicker fabric is preferred. For example, some common crocheted items include blankets, hats, and shawls.

Crochet stitches can easily vary in height. This makes crochet easier for designs where height variation is desired.

These varying stitch heights can allow a crocheter to make interesting stitch patterns. For example, the photo below shows a close up of my Lauren Square which uses crochet stitches of varying height to get its ripple effect that reminds one of ocean waves.

Because you can put your hook in different places, crochet stitches also move easily in different directions. In one popular form of crochet, free-form crochet, stitches are placed wherever the crocheter desires without following a pattern.

Crochet must always be made by hand. There is no crocheting machine. So if you see a crocheted item for sale in a store, you can know that someone made it by hand.

Knitting has also been described as making interlocking loops. The difference is that in knitting usually multiple loops are “live” and worked in rows or rounds at one time.

In knitting, multiple loops of yarn are held on one needle and worked to the other needle in rows or rounds. Because you are not making little knots, knitting generally uses less yarn than crochet. Knitted fabric is also usually thinner than crocheted fabric.

Thus, knitting can be better for certain kinds of projects where thinner fabric is preferred. For example, sweaters are often made from knit fabrics.

However there are many beautiful crochet sweater designs available. And if you want a really lacy sweater, crocheted can be better because of the ease of making crocheted lace.

Knitting uses two basic stitches – the knit stitch and the purl stitch. Then, as in crochet, there are lots of variations to produce different effects.

Is Crochet or Knitting Easier?

Ok, this may be a little biased, but it seems the consensus is that crochet is easier than knitting. Crochet is easier to learn and fix. It’s faster, and you can move in different directions.

One hook is easier to handle than two needles at first. Also, there is less risk of a dropped stitch in crochet. If you drop your hook, there is only one live loop of yarn that can unravel.

In knitting, you work the project from one needle to the other. If you drop stitches from one of the needles, you can risk all of those loops unraveling.

The loops almost never fall out. Or, if they do, it’s only a few loops that come out. This makes it easier to fix and recover from mistakes in crochet. If only a few loops unravel, it is easy to make them again.

One other method is to work on circular knitting needles. When you want to take a break, you can slide the knitting project on the wire connecting the two needles. The needles are then much less likely to fall out.

If a needle does fall out and some stitches unravel though, it is harder to repair. You will need to place all of the loops back on the needles and correct for any stitches that have fallen out.

To take the counterargument for a bit, some say knitting is easier to learn because there are only two basic stitches. So the initial learning curve may be shorter.

Once you have the knit stitch and the purl stitch down, you can create all kinds of knitted patterns. And, others say knitting patterns are easier to read than crochet patterns for this reason as well.

Is Crochet Faster than Knitting?

Crochet is generally faster than knitting.  There are bunches of quick crochet projects out there if you want to make something fast.  Things like quick and chunky blankets and hats.

Knitting projects can be quick and chunky too, but generally the equivalent crochet project will go faster. It will also likely use more yarn.

Of course, speed will depend on a bunch of variables including a particular person’s speed and skill, the size of the hook or needles, the type of project, and the kind of yarn.

Some Projects Are Easier in Crochet

Any kind of project that you can crochet, you can probably knit and vice versa. Both crafts are incredibly versatile, and talented designers have created patterns in both crafts for almost anything you might want to make.

Some projects do come more easily in crochet because of its speed and its ability to move more easily in different directions. Crochet is faster than knitting so it’s a great choice if you like larger projects like blankets especially if you’d like to get them done more quickly.

Crochet also moves in different directions much more easily than knitting. This makes crochet a more a natural fit for three-dimensional objects like toys and also for making motifs and flowers.

You can literally stick your hook anywhere in a project. Thus, it is easier to make projects that require moving in different directions. This includes making granny squares – one of the classic crochet designs.

This is the good stuff! Both crafts use yarn, and really almost any kind of yarn can work for either craft.

Yarn comes in a variety of weights and materials. The Craft Yarn Council maintains a list of standard yarn weights including a handy table that shows the recommended needle and hook sizes for both knitting and crochet.

When you are starting out, it may be easiest to begin a project using yarn right in the middle of the yarn weight system. This weight of yarn can be variously called medium, worsted, afghan, aran, or #4 weight yarn. It may also be easiest to pick up some inexpensive yarn for your first project.

I am a big fan of always choosing yarn that speaks to you and that you love. This could be because of how it feels, the texture it creates, its color, or how well you know it will hold up in the wash.

There are so many places to buy yarn. If you are interested, explore the yarns at your local yarn store and independent yarn sellers and dyers. You can find lots of different kinds and brands of yarn if you look around.

And, you can swap different yarns in for the yarns used in patterns as long as you can get the same gauge. Before you know it, you will build up a “stash” or collection of yarns you personally own.

Other Similarities Between Crochet and Knitting

There are other similarities between the two crafts as well.  Many enjoy both crafts because of the generally quiet and meditative nature of producing stitches by hand.  This applies in both crochet and knitting.

For smaller projects, both crafts can also both be extremely portable.  There is no need for specialized equipment. It can be easy to carry around a project, your hook or needles, and maybe a few extra materials such as scissors or some stitch markers.

Both crafts are also relatively inexpensive to start. With no specialized equipment, the biggest investment will likely be your hook or needles and yarn.

You will probably want a few other items as well such as scissors, stitch markers, and a tape measure. And, patterns are available in a variety of forms for both crafts.

Why Crochet is a Great Craft

To sum things up, there are many similarities between crochet and knitting. And, they are often easily confused. Crochet is a great craft if the following appeal to you:

One of the best things about both crafts is the ability to be a lifelong learner and to experiment with new techniques.  This may be why many come back to these crafts again and again as their go-to hobbies.

Or, it could be the yarn too – because who doesn’t love digging into a pile of squishy yarn. 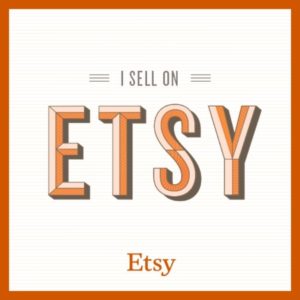